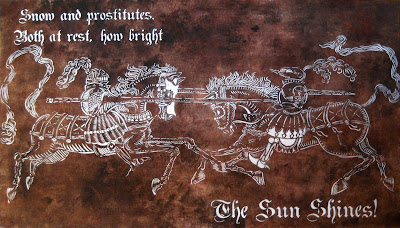 Been drawing since before I can remember. Been doing graffiti since I was six. This one has to do with a lot of that. Other things too. Love of art, public art, public space, and in particular the love of Basho, his ideas on Zen and being, and solitary prowlings where I explore old ruins of the Kristallnacht which have become little more than a jungle of shopping centers. And wandering from shadow to shadow the night is only disturbed by the occasional drunken tourist or a faked orgasm from a park bench.